These are my Schutztruppe Askari. They are Copplestone castings figures. The German is a Brigade Games miniature sculpted by Mike Owen. These are dressed as they were at the beginning of the war. Later on they adopted floppy hats and kahki puttees.
Posted by legatus hedlius at 09:54 No comments:

The release of Great War Miniatures early war French has got me digging out the GWM early British I bought about six months ago.
I hadn't realised a Warhammer Historical's WW1 set of rules was quite so imminent and so I filed down and based the 12 figures I have got today. I was hoping to do some painting this afternoon as I had the afternoon off for my annual diabetic eye check (hooray, my eyes are still OK!). I had just put a few colours on some more Ruga-ruga and Ngoni when my daughter returned from school and announced she needed the computer (and hence my desk) for her homework. I'm getting her a laptop for her birthday so that should prevet this, I hope! This she managed to drag out until the exact moment the light failed. Grr! So it was this that forced me to disappear into the kitchen to base some figures, instead.
I am going to add them to the "in progress" pile and see how I get on with them in the next month or so. 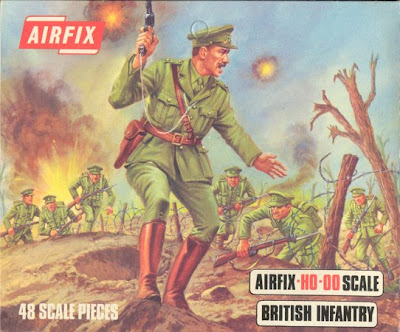 I have always been interested in early WW1 since my Airfix days when I had hundreds of the German and British infantry. I used to dig trenches at the end of my mother's lawn and make endless coils of barbed wire by winding wire around pencils. I spent weeks over the summer holidays extending the trenches until they covered a front over ten feet long. Only a couple of years ago, when planting some bulbs, my mother dug up one of those plastic German stretchers which had been buried in the garden for over 35 years! 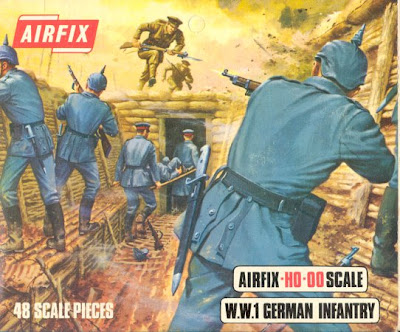 About eight years ago I bought a lot of Peter Pig's 15mm early WW1 figures. I had no idea how I was going to use them but I did paint quite a few. 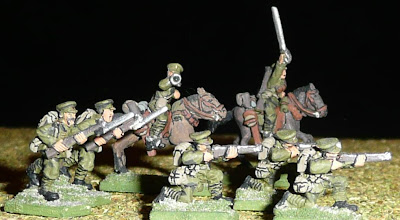 Some of my Peter Pig 15mm figures

I really liked the Peter Pig figures and they have a brilliantly comprehensive range but I just can't paint 15mm.

My Renegade British. 21 figures painted; that's an army by my standards!

When Renegade brought out their Mike Owen sculpted WW1 figures a few years ago I bought French, Germans and British and even painted quite a few. I didn't have any specific WW1 books at that time so come of the colour choices are a bit odd but they were great to paint. I notice that I still have a few dozen to paint but gave up on them when they failed (as usual with Renegade) to complete the range and started to move on to late war, which was less appealing to me.

GWM spiffy officers. A couple of them look a bit dim. Probably went to Cambridge.

I am hoping that Great War Miniatures will cover some of the cavalry figures I would like to see like Uhlans and French dragoons. There were a few sharp cavalry encounters in the early days of the BEF in France which would make good skirmish games. After all it was a cavalryman, Trroper Thomas of the 4th Dragoon Guards who was credited with firing the first British shot of the war during an engagement when the Dragoons charged, at full pelt, a unit of Uhlans. 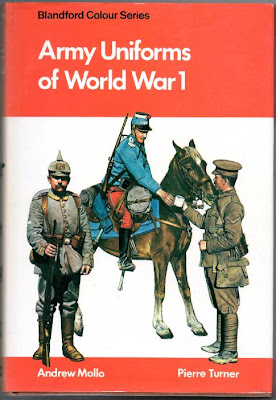 The Renegade and GWM figures go well together (or at least the British do) so although the latter figures are much more accurate as regrds kit my original Renegades may not be a complete write-off. I now have a few more reference books including the long out of print Army Uniforms of World War 1 by Andrew Mollo, which is excellent, particularly on things like webbing and equipment. I borrowed this from the local library a lot and tried to buy it from them but they wouldn't sell it to me. My wife, unbeknown to me, then found a second hand military bookseller through directory enquiries and got me a beautiful condition second hand one for a surprise birthday present!

The key thing with the British is I think I have painted them too green. Early WW1 uniform khaki seems to be a bit browner. It all depends on whether there is a suitable Humbrol paint. I probably need to get down to the National Army Museum.

Posted by legatus hedlius at 09:45 No comments:

Here are my Brigade Games German Schutztruppe figures for East Africa. All the coloured cords on the helmets were a fiddle to paint but they look OK, considering I did them a few years ago. I saw an episode of Ray Mears' Survival where he went and lived out with the tribes who inhabited the area of the conflict. There was quite a bit about the war in the programme but the interesting thing was the terrain. Just grass (quite green), scrub and small trees. Pretty easy to model I would have thought, even for me. I have used a slightly redder base shade than usual to reflect the colour of the local earth. 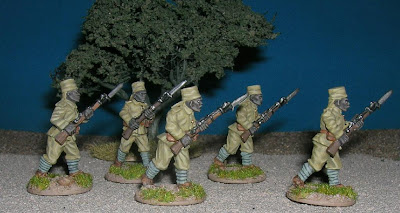 These are German African Schutztruppen. These are not Brigade Games but Copplestone Castings. I chose these as Brigade Games themselves admitted that on the early figures they failed to sculpt them as Negros: a rather fundamental mistake I would have thought! They are a little taller than the Brigade Games figures but even I don't mind as the look and bulk is so similar. The Brigade Games Schutztruppen they did later (from the later period with the floppy hats) are much better.

These are quick figures to paint and I based up the rest I had the other night, including some Sikhs.

Posted by legatus hedlius at 09:38 No comments: 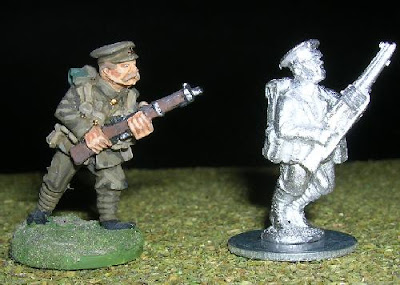 Renegade on the left. Great War Miniatures on the right.

I decided to order some figures from Great War Miniatures who have started an early WW1 range.
A couple of years ago, when they first came out, I ordered quite a lot of the Renegade Miniatures World War 1 figures. I wasn't very interested in the late war, with all that tedious trench warfare, but the early period with rapid manoeuvre and fighting retreats apppealed to me, especially as my Grandfather was in the KRRC in the BEF.
So I was very attracted to the new Great War Miniatures early war figures, even though I had been warned that they were not compatible with the Renegade figures.
Not so! I am very fussy about different scales but these seem fine to me! The rifles are more realistic and the details of the packs are more accurate but in separate units they would look fine and, when painted, maybe even in the same unit. I am now hoping that they will produce all the figures I want from an early WW1 range, which Renegade never did, such as French Cuirassiers and German Uhlans.
Posted by legatus hedlius at 17:24 No comments: 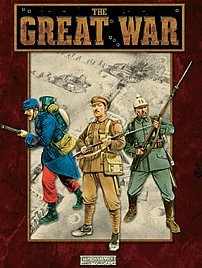 It is months since I started a new blog but the new Warhammer Great War Rules has inspired me!
I bought a copy this week, along with the Osprey Field of Glory Ancients rules and some Perry plastic ACW figures. I thought I would go straight home and start assembling the plastics but I started to read the Great War rules on the train and when I got home I immediately sought out the Renegade WW1 figures I painted a few years ago.
I have decided to finish some more figures and try out the rules which look very familiar to anyone who plays Warhammer Ancient Battles although they are based on the Warhammer 40,000 rules, it seems. They are what I would call big skirmish rules, calling for 100-150 figures a side but with each figure representing 2 or 3 real soldiers.
I am putting WW1 themed posts from my general blog and my Darkest Africa blog on here too, to keep everything together.
Posted by legatus hedlius at 16:54 No comments: 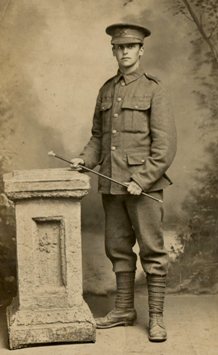